All of the rock is done on the Craft Cabin! It really looks great. The rest of the exterior will be finished in the cedar shakes that have been started on the south side (below). The guys really got a lot done from Friday evening (yes, they worked past dark) til Saturday noon. Eli and Dave left about then. 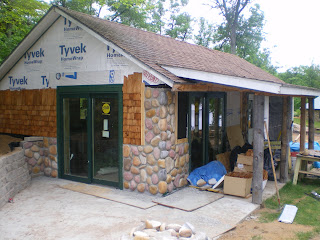 Little Tony continued working Saturday and all day Sunday. He and the guys took down the old entryway to the stairwell that goes into the basement. Plus, they dug out where the new stairwell will be. It will run along the building, instead of going out away at a right angle. You can see to the left of the tarp that they dug down pretty deep. 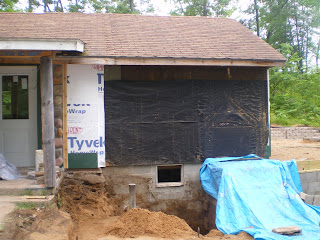 They also worked on the lakefront. They scooped off the top layers of gravel and saved that for later use, leaving sand and dirt which will be leveled off and laid with sod. Basically the road will no longer go straight towards the lake, but rather turn to meet up with the path that goes behind the snack stand. Also, the fire pit will be placed around the bottom of this picture, almost in the middle of what was road. 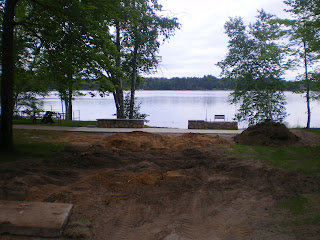 They also made these two little walls on the newly poured path. They will act as a formal entrance to the beach. Little Tony and the guys laid concrete block and covered them with the rock and cap stones. It's the perfect height for sitting on and enjoying the view of the lake. 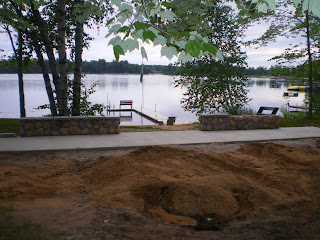