Tuesday. Tony and the guys put the retaining wall around the edge of the new concrete patio on the side of the Craft Cabin. Then they brought in gravel and sand to back fill the wall. In the below pic, Tim is wrapping the exterior with tar paper and tin. The rock and cedar shake exterior installation will begin soon. 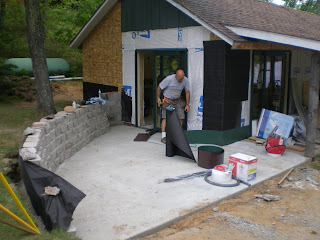 Below, Tony and the guys laid the cement block that will be a hidden retaining wall on the other end of the Craft Cabin. From the wall and to the right will be concrete. Tim got this end ready for exterior rock and shakes as well with the tar paper and wire mesh. He also trimmed out the doors and windows. 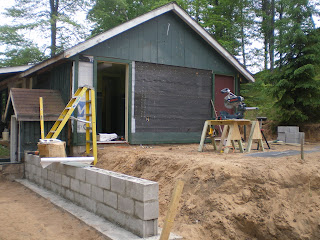 The guys also took apart all of the concrete forms from yesterday.
Chrissy had to resend the grant application that she worked on yesterday. Then she and Karol inventoried all of the paper goods and food that are on hand for camp. It was a little tricky this year as the Craft Cabin used to be where all of the kitchen stuff was stored. Now it's all crammed here and there around the grounds.
John finished mowing the grass. In the afternoon he and Sue left for Able Family Night, and did a few errands on the way.
Jo and Tony Sr. went to the food bank and got food for work days and camp.
Annissa and Karol went to the storage unit and went thru some of the theme night decorations and costumes.