Wednesday:
On Wednesday, Chrissy entered the rest of the camper information into the computer.
Karol went to the food bank in Omro to get food for camp, and did some camp errands on the way down.

Thursday:
The Piantine and Kelly kids' last day of school! After school Chrissy took her kids to Green Bay. They visited Bay Beach and grandma's pool. Annissa and Anthony were picked up at school by Grandma and Molly Stonelake, whom is visiting for a few days, and went to McD's for lunch and to the park.
Karol cut the grass and worked on turning and old dresser into a sink base for the small bath of the Craft Cabin. Tim had already cut the holes in the back for the water lines and drain, and attached the dresser to the wall. Unfortunately, it had to be taken down and remounted with 2x4 and 1x4s in the back to give the sink extra depth. After getting that part done, Karol used the old wood top (which was too warped to use with a sink) to cut a strip to cover the ends of the raw lumber. The top (1/2" plywood and cement board) was then cut to size. The front is bowed and echoes the oval sink. Those were glued together and screwed down into the cabinet. The top drawer was cut apart and the front nailed into place. A 1 1/2" strip of cement board was cut and screwed on as an edge to all three sides. 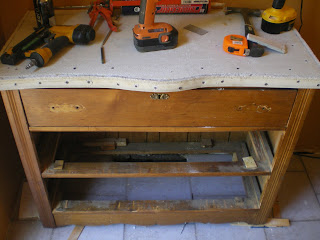 The next part was the worst. Cutting the hole for the sink. For much of the circumference of the oval, the tools had to cut thru the plywood, cement board, and either an inch of pine, or a couple of inches of oak! The jigsaw was struggling and kept getting too hot. So while that was cooling down, the roto zip was used. That went only deep enough to get thru the first layer, but better than nothing! Then it was more slow going with the jigsaw. Too got again. Finally, in the back where the oak was, Karol sawed many holes with a 3/8 in drill bit to perforate the stubborn area. Then she broke it out. Let's just say, the hole is out, but it's not too pretty. Finally onto tiling, which turned out to take about 6 hours. The edges were done first, then the top, and finally the asymmetrical backsplash. It'll be a week or so before this project is finished. Really hoping to find an easier way to work with that epoxy grout! 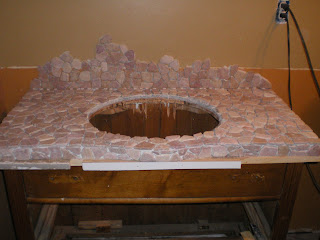 The white line that you see in the above picture is the wood strip that's temporarily attached to aid in keeping the facing tiles in place til the adhesive dries.
Little Tony, John, Jen, Tim and Marceaux had their last full day of camp today.