Even after working past 10 pm on Friday, Little Tony and the guys were hard at work by 7 am trying to get everything done so that they could make it to the Able Picnic at Bay Beach. Late on Friday, Little Tony used the heavy equipment to make a firm walking path (seen below) from the gravel road to the snack stand. That area had become very soft and messed up from all of the heavy equipment driving and turning in that area. Shortly after 7 am, Richard had the cement mixer making mortar. Little Tony used the mortar to attach the cap pieces on the short walls in front of the beach area. Once attached, the walls are perfect for sitting on to enjoy the views. Once that project was complete, the rest of the mortar was used to start the cement block retaining wall that is needed for the bocce court. Little Tony got both corners done. 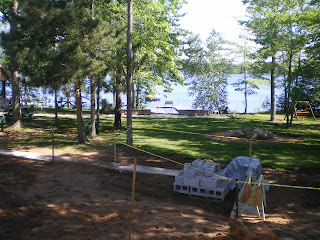 After another trip to the shack in Athelstane for more barn boards, Tim trimmed out the bathroom. The closet door will be made another day, as the rain forced him to stop working. (the saws were both set up outside. 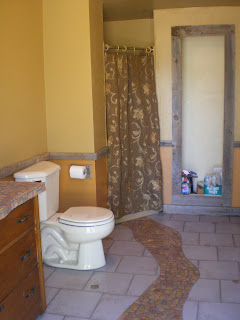 Karol left at 12:30 to pick up Annissa from Lake Lundgren Bible Camp, while the guys kept working. She left lunch out for them, which they never even touched. In a race again rain and time, no lunch allowed. During all of this, somehow all of the tools and materials that accumulated in the work zones were cleaned up and put away. 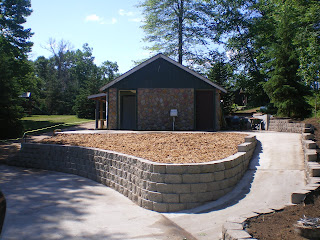 After showers, everyone left for the picnic at about 2:30, feeling very good about how the grounds look. The rain held off in Green Bay for the Able Picnic and everyone had fun. DJ had a little too much fun on the rides, and paid the price afterwards. As a reward for all the hard work done in the past week, the Kelly's, the Piantine's and the Hartley House gang all went to the budget cinema for a movie. (truth be told, Little Tony and Tim struggled to stay awake.)
Sunday morning, Little Tony and Karol worked on the final touch ups before the Cornerstone Church picnic. Little Tony cut some low branches where people will be walking on the new path, and he ribboned-off areas where people shouldn't be walking. Karol worked til 10 cleaning both bathroom floors, putting up shower curtains, installing a toilet tank and toilet paper holder. All the while Tony Sr and Jo were doing final preparations for the picnic. Thankfully, the threatening rain stayed threatening until evening, and the picnic goers had a good time.
Meanwhile, after running Mega, Tim and Little Tony had a missions trip meeting at Living Hope Church for those who will helping at Camp Daniel this summer. Afterwards, Little Tony went to the Mandich's for a visit and to pick up a motor boat that they are letting Camp Daniel use for the summer. At 5:30 it was off to the young adults group at the Falk's home, where Little Tony and Tim shared about Camp Daniel.