Little Tony and the guys were digging behind the Craft Cabin and they came upon what must have been a dump area from the Salvation Army era. In the pic below you can see the quantity of things found. The group on the left is all bottles. The right pile has metal pieces, a shoe, cans, broken china and crockery. We saved a bunch of the pieces for future display. 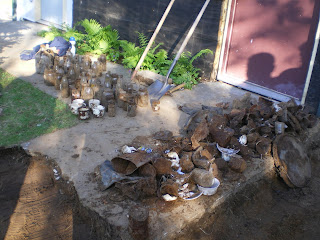 Little Tony had fun on the heavy equipment. He started to pull up some of the old concrete on the side of the craft cabin. After the picture was taken, he worked until 9pm. Both pine trees are now gone and much of the dirt from the high area behind the cabin was dragged back to fill in the lower areas where the road will go. 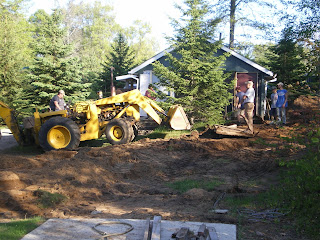 This morning Jen and John did some planning and preparations for the chapel services that they'll be running next week at Special Touch camp. Then Jen and Marceaux spent the rest of the afternoon and into the evening painting the 2x4s that will be used for exterior trim. 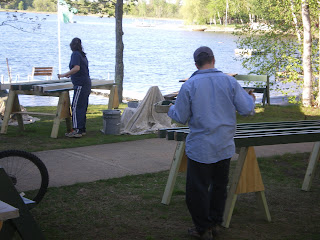 Karol and Little Tony did some shopping at Menards for Craft Cabin supplies, then had a meeting in Menominee. After arriving back at Camp Daniel, Karol primed the window, and painted both sliding glass doors and window.
Tim and Chrissy had a meeting in Green Bay this morning. This afternoon, Tim finished the prep work needed for the poured concrete countertop.