One day of rain may slow down work outside, but not two! Little Tony, Richard and Brian worked this afternoon in a steady rain getting the Craft Cabin patio ready for a concrete pour next week. They laid down pea gravel for a base for the landscaping block. The first row of block will be used as level for the screed. They dug out an area to pour footings for some more block work behind the craft cabin. George figured that if everyone else could handle the weather, so could he! I wonder if the guys all felt as cold damp as George looks in this pic. After his dinner he got a bath, because all day rain and dog don't mix. Little Tony spent the morning on the phone arranging the delivery and unloading of cultured stone, retaining wall block and concrete. He also worked on advocating for a Camp Daniel family on the phone with their pastor, which resulted in a Camp Daniel Service! He also began construction of a small wood shed near The Hartley House fire pit. 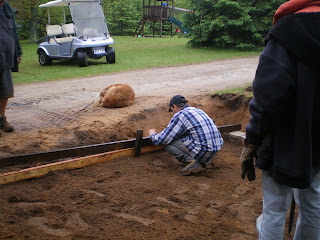 yea! The tile is officially done in the large bath in the Craft Cabin. The white grout really cleaned it all up and made the look more crisp and fresh. Karol was a happy camper (or shall I say, grouter) 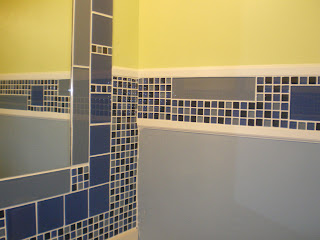 Tim and Nick finished installing the cabinets. Then, after a quick online tutorial, they started on prep work for a poured-in-place concrete countertop. Below you see plywood base, 2x4 and wood that will frame up the front edge, tar paper, and rebar suspended from the tar paper by wood blocks. Tim is excited to do this project for the first time. He and the guys will probably pour it on Saturday. 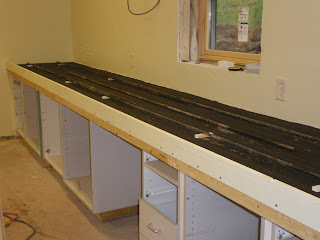 After completing the grout in the bath, Karol primed the two sets of wood sliding glass doors.
Pastor John came back from MN today. He & Richard went to the dump, (which is always better on a cool day, rather than hot) Pastor John also continued work on the lessons He, Little Tony and Jen will teach next week at the Special Touch Camp in Minnesota, Tim and Marceaux are attending as counselors.
Tim, Chrissy and family headed into Green Bay for youth group, Tim s preaching tonight as pastor Mike is out of town. Jen and Marceaux are in Green Bay, spending time with Jens grandma, who is not doing well physically and is not expected to live very long. please keep Jen in your prayers during this hard time.