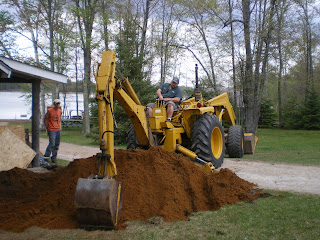 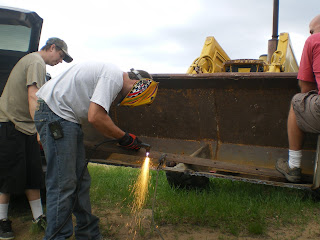 Sam Johnson arrived at Camp Daniel at 7:30 this morning, after leaving Black River Falls at 2:30 am! They worked on the heavy equipment today. He took pictures of most of the pieces and will try to sell some. We'd like to sell some of the larger pieces to buy a skidsteer. They worked all day, and left at about 4:00 pm with caffeine in hand for the 4+hour drive back to Black River Falls. Tim and Little Tony were Sam's lovely assistants today (aka they mostly watched him work) There are very few things that those two can't do, apparently welding is one of them. Maybe they picked up a few pointers. After the Black River Falls crew left, Tony used the tractor to dig out dirt (of course by dirt, what I really mean is sand) around the Craft Cabin where a concrete patio will be.
Karol worked on getting all those plants in the ground from Thursday's plant sale. She planted/weeded her way around the gazebo. She discovered that there's a lot more garden there than it appears!
In the evening, Little Tony, Karol, Annissa and Anthony went to Karol's dad's cabin for dinner.
Marceaux didn't have much of a change of scenery. Yes, the Mega Micro Bus again. What a huge undertaking it has been. He did officially inform Little Tony that it won't be running for the parade on Monday. The parts he needs are only available via junk yards. He found what he needed...in California.
The guys worked by the lakefront some today, but mostly, they dug up the sod from the area previously mentioned by the Craft Cabin. The sod will be reused elsewhere.
Jen painted 2x4s that will be used as exterior door and window frames on the Craft Cabin and Hartley House.