The parade's over, time to get back to the Craft Cabin. The goal is to get Jen in before they (Tim, Little Tony, Jen, Marceaux and John) leave for camp in Minnesota, which is Sunday. Karol and the guys cleaned up and put away tools that won't be needed anymore (and a few that surely will) Tim began the day in a battle with the fax machine (he did eventually win.) Victory in hand, he moved to the Craft Cabin and finished the plumbing for the bathroom sink, then put the top trim on the border in the bathroom. Meanwhile, Karol and the guys got the cabinets (see pic below) from the dorm and put them in order. Then Karol puttied the nail holes on the border trim and gave it all a coat of paint. Tim moved into the main room and started on the cupboards. They are commercial cupboards from a lab and are about 4" deeper than average. Some were 10" deeper than average, so Tim cut two of them down to match the rest. Nick helped him level and attach the cabinets. They got about 75% done.
When the guys weren't helping Tim and Karol, they worked on leveling the new patio area that's adjacent to the Craft Cabin. They also had to cut out roots that were in the way. Some large enough to require Nick to use the reciprocating saw. They also made time to get their house clean. Quite a productive day. 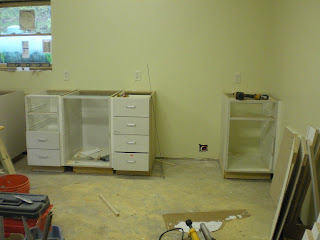 Below is the toilet area. There's a wall dividing it from the sink. The hole on the left goes into a shallow closet. Just adding the upper trim makes it look better. The grout will bring it home! 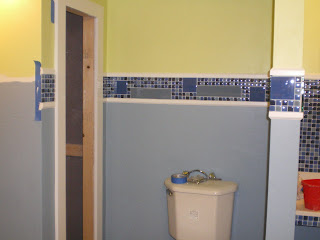 Karol went over applications for the third week of camp (that's the week Living Hope Church is staffing) and organized who we still need applications from, who's coming, who's not, etc.
Jen and Marceaux were in Green Bay today. They ran Able Fellowship Family Night tonight and will be back tomorrow.
Pastor John came back from Minnesota directly to The Able Family Night. Sue will stay in Minnesota all week.
Little Tony Spent several hours on the phone talking to our camp speakers for 2009 and returning calls from campers parents and guardians. He also worked on getting organized for camp.