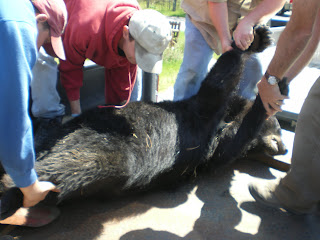 You never know what's going to happen at Camp Daniel on any given day. A phone call came late this morning with the offer of a black bear that was found dead on private property in northern Marinette County. The game warden picked it up and brought it to Camp Daniel. Below Richard is checking out the new addition to "his" nature center. After the photo op, John brought the 250 lb male black bear directly to the taxidermist in Three Lakes. 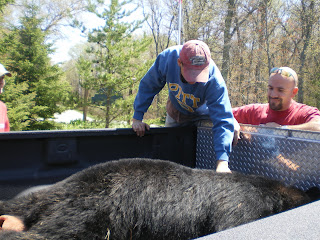 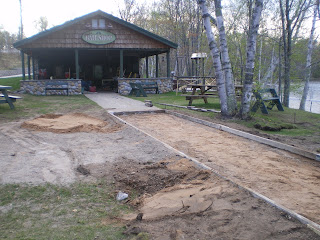 Little Tony, Richard and Brian formed up the new concrete walk near where they pulled out the boat launch yesterday. 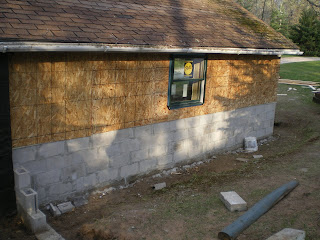 Tim and Nick worked on the exterior of the Craft Cabin. They framed, insulated and sheeted it. They also installed the final window. 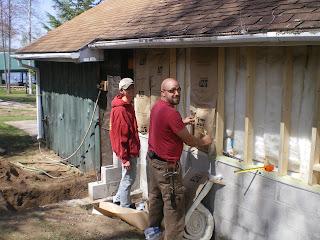 Marceaux still plugging away on the Micro Mega Bus! He's been told that if it isn't running by Monday for the Memorial Day parade in DePere, that he'll be pushing it thru the parade! how's that for incentive. Hopefully he'll get all the parts he ordered today in time to get 'er done. 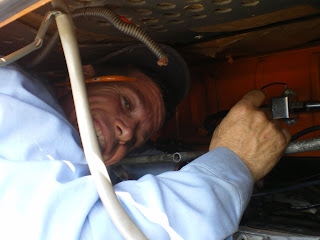 Deacon Jim from Our Lady of Hope Church, in Illinois, came up today. He's the leader of the youth group that's done 3, one week, working mission trips to Camp Daniel over the past several years. They're a great group, and we always appreciate everything that they do when here. He came to finalize the projects and place a materials order at Menards. Karol made lunch for him, Little Tony and Tim after she spent the morning helping in Anthony's class and grocery shopping.