Today was all about the parade! 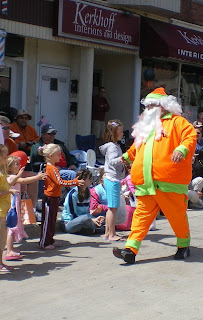 We left Camp Daniel for the Memorial Day Parade in DePere at 6:00 am. almost 40 people from The Able Church and Living Hope Church marched in the parade to promote our Mega ministry for kids and their families. Little Tony and Tim stopped at Living Hope Church to pick up the costumes for the parade. Then, we all headed to the parade route where we decorated the truck, trailer and Mega Micro Bus. Our paraders included kids, adults, puppets and all of the main characters from Mega, including the above shown Mega Claus. He was a huge hit with the kids. 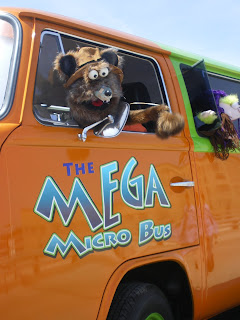 Norton the Rat was one of the puppets singing along to the Figureheads song, "Born for a Reason" and MEGA theme song which was cranking from the Mega sound system. 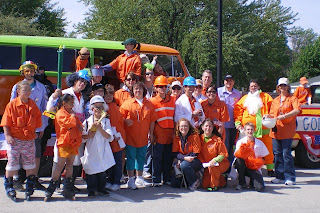 Here's a shot of all of the paraders before we started on the route. 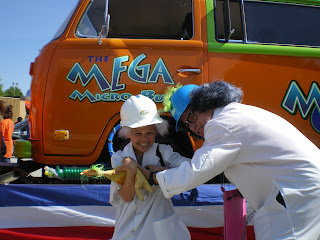 Marceaux was the Professor and Anthony was the micro prof.  They were a lot of fun. But I'm not sure that anyone out shown Kitt Cleereman. She's the consumate cheerleader. 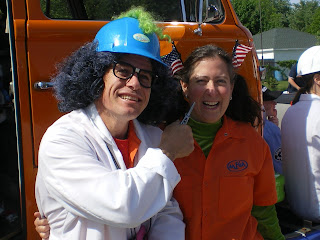 Here's a pic of Marceaux and Jen. How cute are they?
We handed out about 500 MEGA brochures, we will have 2 or 3 thousand ready for next years parade. Overall it was a ton of fun and a huge success. The bus drew a lot of attention, and many were interested in finding out more about MEGA.
Tony and the guys unloaded the bus and moved some dirt in the evening and Karol continued gardening into evening.